In previous blogs we’ve talked about choosing a distance measure as a way of saying “these two things are close if …”. One useful measure is Jaccard similarity/distance since it measures the similarity between two sets. This is useful if you have a lot of categorical variables (i.e. ones that don’t have any inherent ordering). For example, two people are probably similar if they have the same sets of interests/hobbies. The Jaccard similarity of two sets is just the size of the intersection divided by the size of the union. Or put visually: 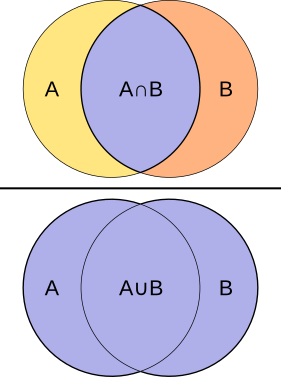 As a more concrete example let’s imagine that we have collected a list of people’s favourite pizza toppings and we want to find which people are most similar.

So what are the Jaccard similarities between these people?

You’ll notice that two sets that are exactly the same have a similarity of 1. To change this into a distance we just to

You might have noticed that Jaccard distance doesn’t take into account how frequently the items in the set occur. If counts do matter for your problem, then you will want to use Hellinger distance. Let’s imagine you have some data on the number of times people have read a given book:

Marie, Jordan, and Patrick have all read Harry Potter which would make them similar under Jaccard similarity. However, Marie and Patrick are probably more similar since they both read it multiple times. Hellinger distance takes this into account. I’ll try to give you some intuition for how it does this.

Hellinger distance is particularly useful if you have a bunch of text. You can consider two documents similar if you have the same words occurring at similar frequencies.

Jaccard and Hellinger are both very useful distance measures that can be used in dimension reduction and embeddings. If counts matter, use Hellinger, otherwise use Jaccard distance.

« I is for Interpretability K is for K-fold cross-validation »