Pandas is a very popular data analysis library for python. It’s an invaluable tool for transforming and munging data. Some of my favourite features include:

It makes it really easy to read and explore your data since you can read, filter, and plot your data in just a few lines of code. This blog is not going to be a comprehensive tutorial (there are actual tutorials linked in the Other Resources section below). It’s intended to give you a brief idea of the kinds of things that pandas can do (to save you from rewriting code to do that yourself). The documentation is quite good and will give you an idea of the types of analysis you should use pandas for (hint: most of them).

The main data types in pandas are series and dataframes. You can think of a dataframe as a spreadsheet or a table in a database. Dataframes are made up of series (just think of a series as a column in a spreadsheet/table).

If you’re already familiar with installing python packages use conda install pandas or pip install pandas. For more in depth instructions there is a guide here. Once you have it installed you can import it using

People conventionally rename pandas to pd (e.g. pd.DataFrame instead of pandas.DataFrame) since you will end up typing pandas/pd a lot.

Here I’m going to use the movie data used in Brandon Rhode’s “Pandas From the Ground Up” tutorial. This includes CSV (comma separated value) files with movie titles and release dates as well as casting. After we’ve downloaded the data we want to load it into a dataframe. We can do that using

which will output the first N rows (in this case 10). This is an easy way to see what the data looks like and if the data is well formatted.

We can easily select rows in our dataframe. For example if we wanted to find movies released in 1991

Let’s break down the above statement a bit. We use titles[‘year’] to select the year column in the data frame. titles[‘year’] == 1991 returns a series of booleans (True if the year is 1991 and False otherwise). Finally, titles[titles['year'] == 1991] says “give me the rows from titles where the condition is True”. We don’t just have to look for rows with exact matches. Let’s search for movies containing “The Hobbit” in the title

Let’s say we want to count how many movies were released per year. We can do this using

which gives a sorted list from highest count to lowest. In our data set we see that 2017 released the most movies followed by 2016. I suspect that this dataset was compiled in 2017 and that 2018 had more movies released in it than the previous year.

The value_counts function also has a normalize parameter which divides the counts by the total number of rows.

Here we can see that about 4% of all movies ever released were released in 2017.

If we want to plot the number of movies released per year over time how would we do that? In pandas we can just do 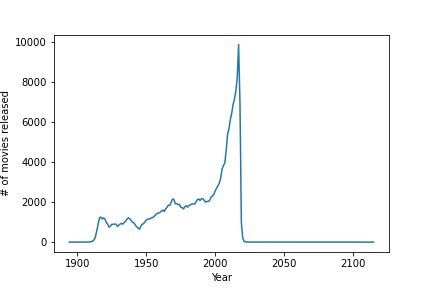 It looks like the number of movies being released has been increasing over time. There are also movies in the dataset that are scheduled for release (including one in 2115!) which explains the sharp dropoff. The .plot() methods that wrap matplotlib so you can customize your plots as much as you want.

Grouping and merging data together

A common (but slightly more advanced) use case for pandas is grouping data together. Imagine we want to see which actors/actresses mostly played leading roles in their career (who appeared in at least 50 movies). To do so we will first load in the cast dataset

Here we have the title of the movie, the year it was released, the name of the actor/actress, if they were an actor/actress, the character name, and the listing in the credits (n). A listing number of 1 means they played a leading role and higher numbers usually correspond to extras. Some of the values of n are “nan”, which stands for “not a number”. We want to drop those rows to only get listed roles.

Note that this is roughly equivalent to the value_counts method. Now we want to select the actors who appeared in at least 50 movies

Now we need to get all the roles each of those actors played. We can do this by merging this dataset with the listed_roles dataframe.

Finally, we can see which actors played mostly leading roles in their career. We will group by the actors name, then take the average of their listing number. The closer to 1.0 the number is the more leading roles they played. We will sort the values to see the actors closest to 1.0 at the top.

It appears that William S. Hart had a leading role in every film that he appeared in.

Pandas is an extremely powerful python library for doing data analysis. There can be a bit of a learning curve but it is worth spending some time exploring the library. Once you can perform some basic tasks (sorting, filtering, groupbys, plotting) then you will become a data analysis wizard!

« O is for Outlier Detection Q is for Q-learning »